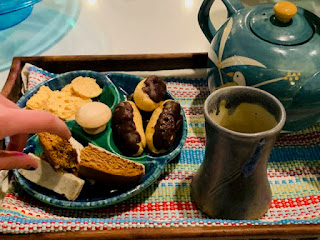 Parenting was on my mind today.

* When my students don't have parents/good relationships with parents/are going through a particularly hard time, it takes everything not to jump in and be their parent. Big A mentioned that I have gotten so much better at maintaining a professional boundary. Yes... and I know how much of an effort I have to put into it.

* Celebrated SH's impending parenthood and I'm so excited to hold her newborn and generally be a new mom helper soon.

* I accepted a new CASA case--a child who has been subjected to parental incest-abuse for years. They are surrounded with support and services right now, and I hope I can be another useful tool in their journey.

*My time with the one human kid and two puppy kids living at home is the highlight of every day. But I don't get very much time with them on weekdays (especially on teaching days) and need to find ways to make them meaningful. Usually it's: a cuddle and then breakfast--we start at 5:45 am! At the end of the day it's: dinner together > a show/game > me conking out with the puppies. It's pleasant and cozy but fairly humdrum.

Pic: My NuNu sneaking a treat from the tray I made for SH's visit. 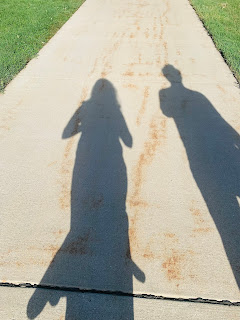 I have no idea why I took this picture of our shadows (Big A and me) yesterday, but I like that my shadow looks vaguely like a mermaid's.

I've tried not to dwell on the news (abortion bans, voting suppressions, Afghanistan, rising rates of Covid) this week in favor of focussing on being the best teacher and parent I can be.

No updates on how that's going yet.

Almost all caught up on admin and to-dos for a bunch of side gigs (CASA, Jaggery, NWSA, and SAWNET) and feeling some relief from that. 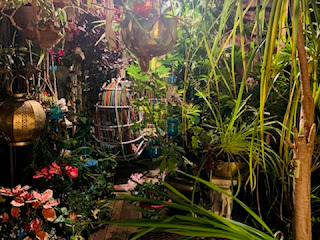 Meetings started at 8 am and ended after 7:30 pm today. Such a FULL non-teaching day with everything from curriculum planning and faculty training, to new protocols for CASA from the Department of Health and Human Services (DHHS).

Lots of support from Nu and Big A who told me they were proud of me. That was unexpected and felt SO NICE! Also, when I was being hugged by those two, I was surprised anew by how much taller than me Nu is now--their face is still such a Baby Nu face!

We liked the vegan dinner I made today (a nicely-sauced stir-fry of Impossible meat and rice noodles topped with mint, julienned peppers, and shredded cucumber) a new-ish, Vietnamese-ish palate with our usual ingredients. We watched a bit more of Korra, (which is sad, neoliberal apologia compared to ATLA) and will probably finish the series this weekend. What's next for us? Perhaps Schitt's Creek, which we've tried twice but can't seem to get beyond episode 4 or 5. A colleague-friend said maybe we should just start from season two, and perhaps that's just what we'll do.

I don't remember going outside today; it's still freezing with snow up to my knees. I did spend some time in the tea garden where we have everything from floppy paperwhites and ratty poinsettias from Christmas to the cyclamen showing up to say, Spring, suckas. The cyclamen gave me such a pang of nostalgic yearning for Greece where it would grow even in the rockiest niches. And apropos of that tiny synaptic nudge, that super-insistent song the sisters taught us in school, "Bloom! Bloom! Bloom where you're planted" started playing in my head. I think I'm trying. 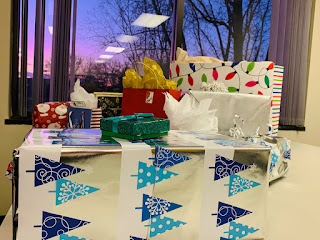 At LD's office to finish wrapping all the gifts for the family the girlfriends adopted from EVE,  and I discovered a perfect sunset shot as we stacked the presents and cleaned up our mess...

I'm thinking ahead too Thursday's CASA hearing, and how the path to adoption for a six-year-old--whose life has been upended by family opioid addiction since they were two--might finally be in the clear.

I think this may be the year I keep my promise to myself and not go overboard with presents for the family. We adopted a bunch of present requests from the UU last Sunday and there are some requests from United Way at work as well, so I've been able to do all the planning and shopping without overwhelming anyone. (Perhaps! There's another week before Christmas.)
at December 17, 2019 No comments:

He didn't use color before 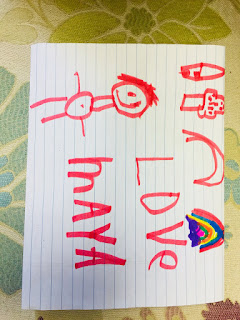 And now he's all rainbows.

I'm so happy for him

my heart is full 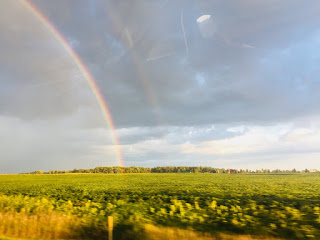 Yesterday:
A long day at work, and a detour
to take school supplies to A. Then--
there's so much hope on the horizon.
I might even be seeing double.

Today:
Nu's Back-to-school "Kickstart"
and we realize that school begins
NEXT WEEK (not after Labor Day
like it usually does). Ooops.

I Miss the Children

of a shadow
of a smile

in changing light
in change

the lost children
their lost parents

the circus of grief
the grimy

half-eaten repetitions
nothing will ever

be safe
be sane
be saved
in shadows 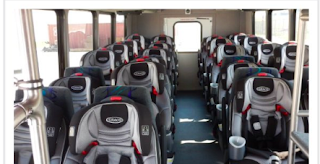 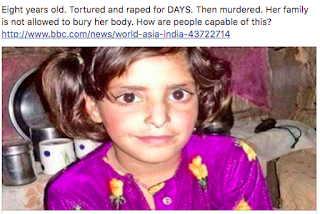 I feel a murderous rage coming on. I can't get the story of this child's face out of my head.

My dad was fond of the radical Tamizh poet Bharathiyaar who claimed, “Thani oruvanukku unavillai enil jagathinai azhithiduvom” (If even just one person does not have sustenance, let's burn down the whole world).

This raw and heartbreaking article. I started reading it in the school pickup line--anxious and breathless after the first paragraph.

That poor child. His poor family. The poor women who were gaslighted. But mostly, and over and over... that poor, poor child. In a way, the skeleton of dysfunction was visible for so long--the delayed second book, the frenzied relationships--and yet, this is a necessary speaking up, a necessary fleshing out... even from three decades away.

I was nice to Nu. But Big A knew enough to leave me alone after I growled at him a couple of times. Not like it's his fault--and he's the one who introduced me to Drown all those years ago--but he's used to my anti-patriarchy rages. And I got hugs and talking later. But god, this article. Children deserve so much better.

I'm still getting used to just three of us at dinner since At went away to college this year. Well, technically five since we always count Scout and Huck, but they don't sit AT the table, just under it : ). We've had to rearrange our places at the table: Nu now sits at the head with Big A and I on either side. Big A and I used to sit on the same side before.

And sometimes the other side of the table is just too far.

We were sitting across plates of felafel, pita, and sliced salad (the pita was from the store, but I made everything else) and Big A just got this look on his face. "Look at you," he said. "You just take care of everyone. You made Nu breakfast and lunch, then went to teach all day, stopped to take care of your CASA kid before you came home, and then made us all dinner."

And then, Big A and Nu came around to my chair and hugged and kissed me over and over. Puppies too, because they're always one second away from celebrating. I feel incredibly lucky to do what I do with the people I love so much.

I’m very happy for some old neighbors/ex-colleagues/FB friends who adopted three children from the foster-care system today. We’ve known about the ongoing process, but they weren’t able to share pictures of the kids until the adoption was final (today!).

And I’m sad today, because it feels like I’ve waited all my life to adopt, and Big A is finally on board, but none of the agencies will follow up with us. I finally caved and did what I swore I wouldn’t do—called in for help from my CASA director. She’s called around and left messages; let’s see how far we go.

At least I get to take my oldest home for the weekend : )!

on the edges of my brain
the hot animal knees
me, tears me,
sees me in tears

I can untie words heavy as air
as ephemeral; I am
a lookout, I am
eaten by the sea


(Note: I'm reading Truddi Chase's When Rabbit Howls and took on a new CASA case yesterday)
_
at December 15, 2017 No comments: