bits of the day 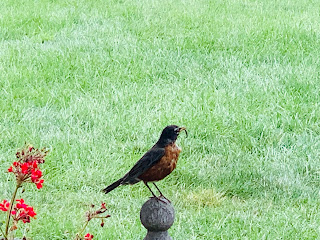 Out early today to Alma for a seminar/workshop and it was so good to see and be with people--many of whom I haven't seen or been with for a while.  A few people were wearing masks indoors and although we're nearly 100% vaccinated as a college community, I wore mine too out of respect.

Work, work, work, and then I headed home with JG on the phone to keep me company on the commute home.

Low: Heart heavy with the looming eviction of millions of families in the middle of a pandemic.

High: Hearing The Foo Fighters' cover of The Beegees' "You Should be Dancing" live from Lollapalooza on the radio. Apparently it's something they've been doing for a while? Anyway, it was the bit of disco silliness that helped me get through the day.

Pic: An early bird posing for me with their accessory worm (yesterday at the Horticultural Gardens). 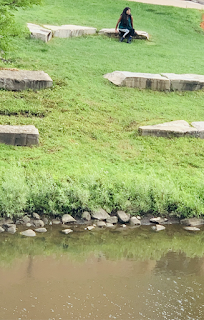 L snapped a picture of me down by the Red Cedar on the first of my three hikes (sequentially with L, BS, and EM) today.

I'm scheduled for a work seminar Mon and Tues and a professional webinar Weds and Thurs, so it seemed like a good idea to get all the hiking I wanted in today.

Also a good idea... scheduling a massage for Friday. 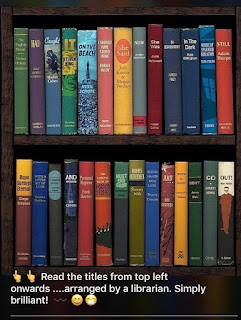 I'm in despair with the pandemic rubbish all over again. Thank the universe for people making creative memes...

In other not news, August starts tomorrow, and a look at my summer list tells me that we're doing alright. I even got to do one of my big maybes--sit by the ocean. But things I threw in there thinking we'd definitely get to them (hammock camping, firepit nights) haven't happened because it has been such a wet summer. 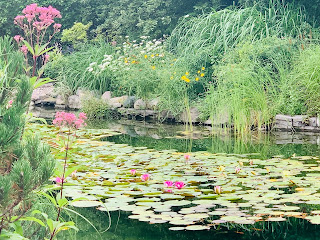 An early morning walk with L after SO MANY days. Between her travels and mine, it's been way too long. The Radiology Gardens (where I snapped this pic) had a fundraiser, and we bought a giant planter of coleus each and lugged it around with us.

At took me to the car dealership earlier in the morning to drop Bluey off for a two-year service. When the check-in person asked if I needed a loaner or a ride back home, I felt so proud telling them that I "brought my son." The son in question was amused that when he stopped to get gas, I hopped out to help him, but was so lost around all the slots and buttons after two years of plugging in Bluey.

A boozy cousin B called as we were getting dinner on the table. A bunch of cousins are getting together at his new beachhouse in Pondicherry and he MISSED me. I've been seeing pics on cousin chat since, and everyone is talking about a big reunion in December. Today I'm pretending (even to myself) that this might actually happen.

And today is officially the day Nu picked their new name. We had tried a name that started with "N' for a while. But then one day as I was getting dressed, I saw Big A's money clip with his initials, and the thought that At would be able to use it one day slipped into my mind...  I wanted that for Nu too. Nu's new name begins with "A" too, so they'll still be the "Baby A" who debuted here in 2007. And even better, it kind of starts the same way as their old name, so I can course correct before I reach the end and avoid slip-ups.

our mother would hate this poem

I dreamed I was listening to my
parents' fight from decades ago
when they were fighting always
and always passive-aggressively
my father sounding patient
my mother sounding smart
neither of them listening to each other...
from our room: my sister and I listened,
grading them--not on how right or wrong
they were, but how not mean they were.
our mother lost our ratings
for our father lost the fights
afterwards, he wouldn't talk to her for days...
every time she happened to be in the room,
he'd be whistling or humming something
to show how he didn't care and didn't hurt--
like at all--not even a little bit
even we kids didn't buy it 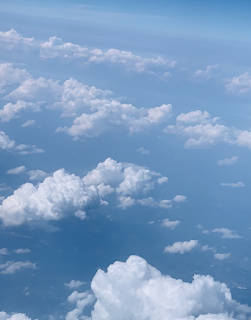 I will not fail fall falter--
what is history but
a storm that left
us all bowed
although not forever long
I watch waves touch
shores and ships
--be calmed
(I remember how old colonizers
told us of monsters on maps
even--while wielding:
their sword-gun-pen)
_______
Pic: Flying home--skies never fail to fascinate me.
at July 28, 2021 No comments:

"still life at the conference" 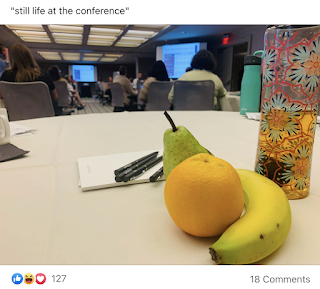 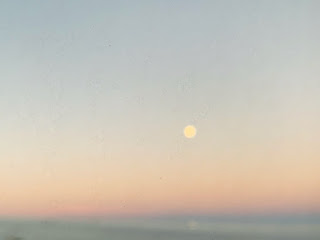 Once more into the skies and on to D.C. where a long postponed conference-workshop awaits.
Big A took me to the airport at 5 am, the plane took off at 6 am, and when I got to the hotel around 10 am-- they gave me a room right away.
Like me, it seemed everyone else too was grateful and eager for connection and collaboration after the pandemic hiatus, and people at our table lingered over half-full glasses of wine long after our formal welcome and orientation concluded. It turned out that one of the new people I met is an IRL friend of the fabulous Sarah from Harry Times. We were discussing academia and motherhood, and I had mentioned how seemingly effortlessly Sarah excels at parenting FIVE kids with an academic job and a spouse with a high-profile job--unsurprisingly perhaps, it appears there's only one of those 😀.
Speaking of kids--I haven't missed my kids since I kissed the human kids sleeping faces and the puppy kids furry faces at 4:30 am.
[Pic: A nearly full moon at sunrise.]
at July 25, 2021 No comments:

Ten days ago, photographer Danish Siddiqui was killed by the Taliban. I know people who don't know his name, but would recognize his images right away. What images! Siddiqui's image of the Rohingya woman keeps showing up in my dreams a lot lately (I've been rereading Sea of Poppies and I think my brain's conflating things).

SV, who's quoted in this New Yorker article, calls his work "memory-keeping, at a time when we have lost our capacity to think or remember." Here are some other galleries of his work in remembrance. 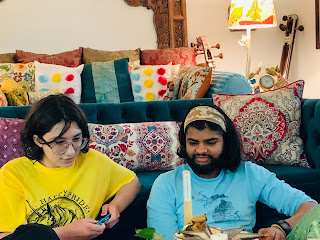 why not stay awake
watch
today's felt blog post
become
just yesterday's ghost
to a moment, wonderful
right now
becoming extraordinary
as memory
as witness, totem, story
-----------------------
Pic: Nu and At playing Super Smash Brothers, a game they acquired the weekend Big A and I were away in Seattle. They had so much fun pretending they were going to invite someone called "Smash" over to the house while I was gone, and I had so much fun pretending to be horrified by the idea. It was only later that I discovered that they didn't know I was pretending. "How did you even know it was a game?"--they asked. I don't know.
at July 23, 2021 No comments: