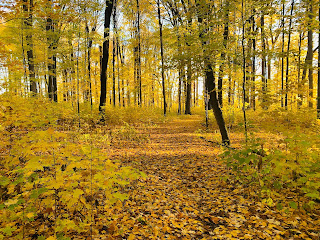 I think we're at the peak of color this week. Added bonus was a blue sky, no grey midwestern 'dome' today!

Paths are crisp and crunchy; we're still inundated with tasks and deadlines; everyone seems to be holding their breath for next week.

Had a lovely chat with At, where he updated me on some health stuff and impressed me with the proactive and grownup way he had advocated for himself.

Later in the day, another chat with At, this time a boisterous facetime with the younger sibs. And then a lot of heavy discussion with Nu over dinner prep and dinner being a sounding board as they excitedly invented their character for the D&D party BS is starting Saturday. (Bless BS!!) It's the most animated Nu has been in a while, and reading the D&D manual introduced them to a lot of words they didn't seem to know (diminutive, arcane...).

I planned to class prep alongside Big A as he watched some cycling videos after dinner (these are just as impossible for me to understand as the unboxing craze all the kids were about a few years ago!) but I set aside my laptop for 'just a few minutes' and fell asleep on top of him and had to start all over again.