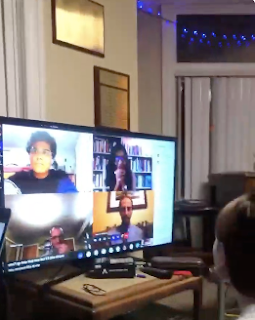 To be clear, my colleagues and I did not fight about cancel culture and statues--but we did deliberate.

Yet apparently, it didn't stop people from watching the panel discussion as though it were a prize fight at the MUN House (per At). If I look amused in the top right corner it's because At was asking some cleverly self-deprecating question online. The corner of the laptop abutting the screen is his! Togetherness! Yay!

(OMG, I love that fellow. I have to admit, I lost all professional composure when a late arrival rehashed the "statues are history" tack in Q&A and At's deadpan riposte on the event chat was: "I got my history major by staring at a bunch of statues.")