Here's to the Chroniclers

Over at the NYT, Teju Cole says true and clever things about chronicling life in this pandemic, and it reminded me of all the bloggers who update frequently, and are giving credence and structure to readers' experiences via their own daily meditations.  I miss my old blogging peers from the time of the Mutiny and people I met there including Cole himself. I remember him saying something faintly nice about a poem of mine here once upon a time, and how it made the rest of my week/month--something like that. Ha.

I've tried to get the kids to keep journals; Nu got as far as decorating the cover of the new notebook I gave them; At scoffed, but he's quite tweety, so there's that. Anyway, these days, I'm starting internet meanderings with: Ana Begins, Grumpy Ramblings, Harry Times, Not of General Interest, Shu Box, Something Remarkable, and Stirrup Queens.  Updating here daily has helped me remember and process these days--yes I've cried every day for the past week, but apparently I've done so for discrete reasons. (Not really; it's mostly been related to living in the pandemic, but at least I have a list of different things that set me off.)

Here's a link to Cole's essay and some pull quotes where he articulates the anxiety of articulation in the right now.

Teju Cole: We Can’t Comprehend This Much Sorrow: History’s first draft is almost always wrong — but we still have to try and write it. 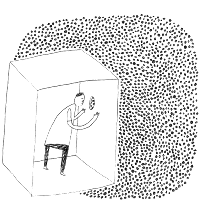 "This year has been a blur, but I remember one day clearly: Sunday, March 8. It was the last day I ate at a restaurant, the last day I went to a concert (Red Baraat at the Sinclair in Cambridge, Mass.) and the last day I hugged a friend. It was also the first time I thought that I should begin writing about what was going on.

"That thought was immediately followed by its negation: Why bother? The same incidents, the same references and the same outrages would inevitably be picked over by other writers; for all our social distancing, we’d all be crowding around the same material. I also knew that anything I wrote could soon be — in fact was almost certain to be — contradicted by new developments. But what worried me most was that certain points of emphasis in my writing would later prove to have been misjudged, and that this would somehow reveal that my heart had been in the wrong place all along.
at May 19, 2020

Thanks for the link!