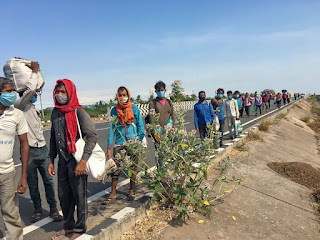 I had barely laced up my shoes for a walk-run when Nu texted to say there was a deer in the yard and "they look like they're injured." I think I smiled that the 12-year-old was generously using their own preferred neutral pronoun "they" instead of "it" to refer to the deer. Anyway, I climbed back upstairs, and we looked at Nu's deer through the rumpus room doors.

The poor thing was badly hurt--way more than I expected. Both back legs were bloody and one leg had no hoof, just bone peeking through. It was surprising how they didn't look like they were in pain--actually they seemed very calm and unafraid, although they left when Nu tried to give them some blueberries.

We called The Humane Society who said they weren't licensed for wildlife and told us to call the non-emergency police line where no one picked up. Nu and I texted friends down the street to be on the lookout. Nu said as we both started to cry that the deer would probably die from the injury or get euthanized, but there ought to be treats and kindness in the meantime.

The thing that really gets me though was how the deer looked at us--unmistakeable eye-contact through the glass doors from 15-feet away. A bit pleading, like--can you help me? I had to go cry in the shower for a while. We didn't know how to help.

Incidentally, that's exactly how I felt when my cousin shared this video (it has English subtitles) about the plight of the migrant laborers in India yesterday on the cousin groupchat. I kind of went off the deep end so she called to check on me and panicked when she couldn't reach me (because I was in the shower crying yesterday too).