No one needs a reason to love Ryan Gosling. (Half Nelson. Drive. Lars and the Real Girl.) If you need a reason, there's this quote that went viral when he was on the Blue Valentine junket:


You have to question a cinematic culture which preaches artistic expression, and yet would support a decision that is clearly a product of a patriarchy-dominant society, which tries to control how women are depicted on screen. The MPAA is okay supporting scenes that portray women in scenarios of sexual torture and violence for entertainment purposes, but they are trying to force us to look away from a scene that shows a woman in a sexual scenario which is both complicit and complex. It’s misogynistic in nature to try and control a woman’s sexual presentation of self. I consider this an issue that is bigger than this film.

Or this Ms. Magazine Post. Or Hugo Schwyzer's Ode.

Or simply this genius mashup of feminist theory and the most dashing actor in Hollywood: 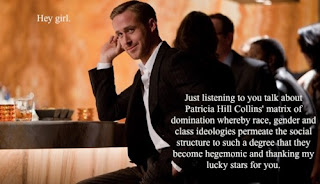