in the war for trans existence 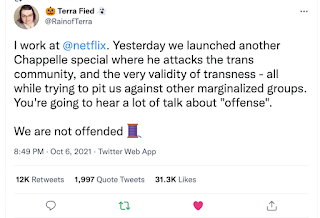 Big A's claim to show-biz fame is that he was in a play with Dave Chappelle. A middle school play. That he got kicked off--Big A not DC--for being mouthy.

I liked the Chappelle Show, I loved Block Party. When we moved back to Big A's old hometown in 2008, I remember being faintly star struck about seeing DC everywhere. His older kids were in At's range, his youngest is a year behind Nu. Then he became just one more familiar face; it helped that he and his wife E were unfailingly kind to everyone. E "loves" when I post FB pics of the kids; I swoon when she shares pics of award shows.

But I haven't watched any of his Netflix specials after the first one--it just didn't even seem him--not the funny Neal Brennan Chappelle, not the kind Yellow Springs Chappelle. I vaguely remember a joke he told on the the first one about two gender studies profs he has coffee with regularly and how all he's thinking about when they're talking is that he'd like to fuck them and I kind of checked out after that.

And now the constant TERF war. RainOfTerra's tweet thread broke me and then I messaged LA (possibly one of the afore-mentioned gender studies profs in YS) around 5:15 am with a link and asked if she or anyone else could reach out to Dave. Her reply started with "Ugh, Dave." and ended with "So I will share this and see if any of Dave’s friends can speak to him in any way he can hear, but I don’t hold out a lot of hope."

And I wish I could do more.