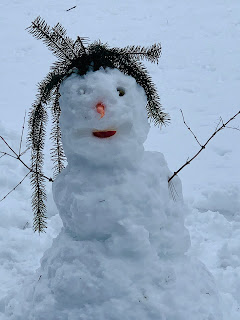 I saw the cutest snowperson when I ambled over to L's house earlier today! Their bangs are like mine, but even that detail couldn't detract from their quintessential cuteness.

Nu's back in (virtual) school today, so everyone is back to waking early so we can have breakfast together and build each other up... apparently, we do this with cuddles, and riddles, and jokes, and teasing putdowns.

Speaking of school... I miss my students. There're lots of meetings starting Wednesday and I started today by writing to every one of my advisees. It's re-entry time for all of us although classes won't start until after MLK Day.

Speaking of days... It's my Boss Day! My dinner pick was poke, which we made together; my entertainment pick was Veep... again!

After everyone headed off to their rooms, I found the tribute Rep. Raskins and his spouse wrote for their child Tommy and I weep to think that someone who brought so much joy and goodness to people didn't feel enough of it themselves.

(Related: I think of Aaron Swartz frequently. Sometimes I think about them multiple times a week--especially when my students are doing internet research. I resent that I was introduced to Aaron Swartz through his obituary--it's a particularly downhearted way to learn about an extraordinary person. I thought I'd written about this before, but a quick search revealed nothing.)