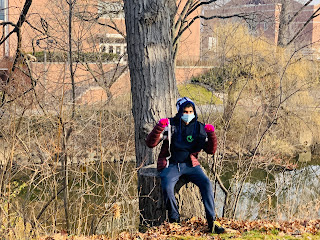 I thought At would be embarrassed by my mask vigilantism while we were out on the riverwalk, but actually, he approved. He kept joking that I might have sounded more authoritative if he'd dressed better--he had to raid the hall closet for hat and gloves and has on a Doctor Who hat and flip-top mittens from Nu's elementary school days. Not quite intimidating enough despite the hammy pose in this picture.

We saw a license plate that said "DRKING," which the new 21-year-old misread as "drinking" and then wondered if the missing letter was because it mimicked how a tipsy person might slur their words. I pointed out that it was probably "Dr. King"--and we laughed about his misreading and over-reading.

And then At: Well, either way, that license plate is probably going to get them pulled over. Regular cops/ Racist cops. [makes weighing/shrug/balancing gesture.]