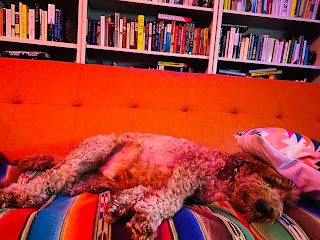 Where were you? I had just finished interviewing prospective students for scholarships, when Big A showed up with a grin, and Nu and I knew right away.

A bit anticlimactic ultimately--I blame CNN's rampant use of the thesaurus for two days of headlines (Biden on the cusp, on the verge, on the threshold). On the other hand, it solidified B's lead well beyond conjecture and allowed saner Trumpers to back away (?). Don't know; don't care RN TBH.

Here, Scout is tired of election news as the rest of us watch Vice-President-elect Harris and President-Elect Biden's speeches and marvel at decency and parseable sentences and earnestness on the podium.

Big A teased me about my (presumably wide-eyed) gawking--but no shame here. Who believes in America's possibility more than an immigrant, after all? Lots and lots of work ahead to be sure, but now there's a chance where before there was only survival.