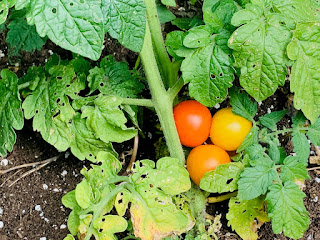 These are the first of At's tomatoes and he has high hopes about serving them with breadcrumbs and mozzarella whenever they he happens to be ready.

I watched a few eps of the new Masterpiece/PBS orientalist fantasy Beecham House--somehow simultaneously overblown and underdone. William Dalrymple is a historical consultant on the show and it's directed by Gurindher Chadha, but despite those two it's really, really bad. I got so irritated almost immediately that the hindi dialogue gets mentioned but not translated e.g., "X speaks in Hindi"--What did he say?! How could it not matter?! Anyway, it inspired "Anglo-Indian" elements at dinner prep time--the peach chutney, ghee toast, and curry-poached cod came together from whatever we needed to use up before our Imperfect Foods box arrives tomorrow and the steamed veg was tongue-in-cheek homage to stereotypical Brit cuisine/me running out of time and imagination.

At dinner, it got us talking about trips to England (especially last year's "Cosmopolitan England" Spring term trip) and all the good meals we've eaten there (some straight out of Sainsbury's). I miss travel.