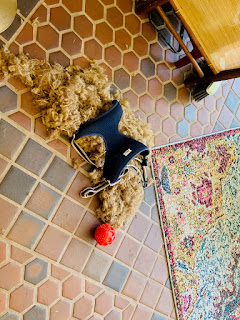 A floppy puppy floofing on the floor? Fun to say! But no.

It's just the pile of doodle fur I trimmed off this afternoon.

The puppies are lighter and smell better, although it was tiring and took way longer than I expected. Huck looks polished enough for a job interview; Scout looks a bit scarily dino-headed because I trimmed too much off his face.

Also, after months of requests, At shaved his beard off yesterday and took us all by surprise. The last time we saw him beardless was in his high school senior pictures. Without his beard and his hair at mid-length, he looked a bit awkward (cough Lord Farquaard cough). I gave him a trim too.