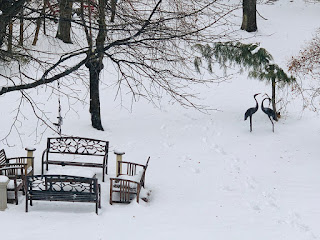 Um. Wow. I went into the garage to see if I had left my tea flask in Bluey, and was HORRIFIED TO FIND I HAD NOT PLUGGED HER IN WHEN I GOT HOME YESTERDAY. There was about a 36% charge, but that isn't enough to get me to work and back.

(I blame the excessively celebratory homecoming reception I received when I pulled in from work yesterday, and all three resident family members--Big A, Scout, and Huck--just kind of descended on me, all loud and huggy. I regret nothing, however. 💓)

Big A rushed home so I could take his car to work, but the scare I got when I realized I didn't have enough juice to get to work nicely shocked me out of my early morning haze. Coming back was a  nightmare that took twice as long as usual as everyone was going 40 mph and there were at least 15 cars that had skidded off the road (though thankfully, cars and people seemed ok) as a cautionary reminders.

In teaching news, I've had two students tell me in the last two days that they had looked forward to taking my class, but now that they're here, they don't like it. 😕