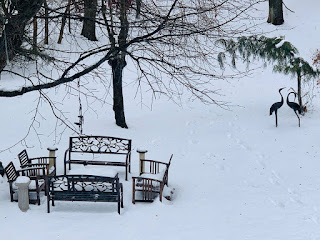 It's Women's March day today and students were supposed to head here for "linner" afterwards, but we had over seven inches of snow overnight and we canceled the linner event in a flurry of early morning texts. At, who was going to offer a ride to other students, was the one who quipped that snow was the biggest upholder of the patriarchy." That kid is golden.

Then suddenly the day was wide open, and I got a few procrastinated tasks off my list, and then T and T showed up for tea and a chat and EBS showed up with a a whole bunch of movie theater snacks for the next "Friday Film Fest" and a whole set of Tupperware because I'm "always sending people home with boxes of food." She had a present for Nu too, and that's the fourth of my friends this year who's given Nu a present alongside me. Love it!!

Big A works tonight, so Huck, Scout, Nu, and I are hunkered down in the rumpus room and plan to watch shows till we we're sleepy. It's not how I expected today to work but it was nice nevertheless.