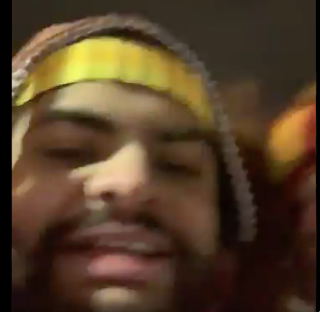 At took off to protest the President's rally in Battle Creek today, despite my protest that it might get too violent especially since impeachment was expected to drop.

But he went (in his "Abolish I.C.E." tee!) and came back with some great stories--the young man who told MAGAs they were bigots (turned out his dad had been deported two months ago); volunteers from the National Lawyers Guild making sure the police were neutral; that everyone had a fit of the giggles when they started playing the Cats soundtrack.

But before he came back with these stories, I was waiting up for him, monitoring the news and Twitter for signs that things weren't going well... and when I heard that the president had called a protester "a slob" I was sure he was talking about my boy, who'd left in an oversized jacket with pockets full of YDSA buttons.