While I was having the dream about losing Nu last night, Big A was at work where he almost lost a teenaged refugee because the dialect her mother spoke was so uncommon that they had to work with someone familiar with a translator from an adjacent language. Her mother gave up on words at one point and just wailed as she rocked her daughter's unconscious body.

There's so much pain in the world, and so much of the time, we're protected from the worst of it. I spent a lot of yesterday finding money to to people--Beto, Abrams, Gillum... while reading about voter disenfranchising and voting machine malfunctions... and then the news of the shooting in the synagogue at Pittsburgh. Today was about the Bolsonaro win in Brazil and a very depressing text exchange with my usually upbeat GOTV champion, At.

Nu and I cobbled some good times despite it all--we went to temple yesterday, UU today, LOLed at Ghostbusters 2016, delivered food to a pregnant friend, made arrangements for kids in Chennai to get Diwali presents and sweets, did tons of laundry, got Nu a new pair of kicks, spent some of Nu's birthday money on (unnecessary) pens and a stuffy, stocked the pantry, did a bunch of baking, and made a couple of comfy dinners.

At some point this weekend we got lost and even that was lovely. 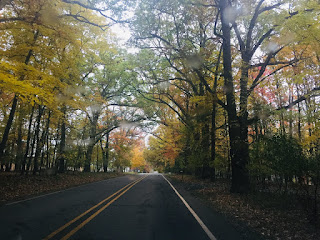 And yet through it all, the knowledge of what lay outside our bubble--inexorable as the real rain, the creeping cold, and our leaky roof.