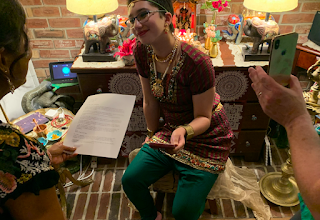 Perhaps there was something portentous about the red lilies Nu planted this week... we celebrated with the red velvet cake they decided was appropriate. Big A made them a card with a "Congratulations" followed by a giant period and we all thought that was hilarious--that morning's laughter was definitely a celebration. But the South Indian in me needed to celebrate Nu more.

I googled "Indian Enby Menarche Celebration" and got nothing. My own menarche was marked by a wedding-level gala replete with catering and professional videographer--but it was too focused on "womanhood and fertility." (It wasn't as lavish as this video I found online, but quite close!) 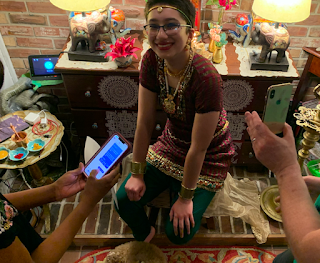 So we did things our way. We got grandparents and aunts on video calls and read Nu a dedication that focused on their maturity, strength... their ability to reinvent themselves. We kept some elements of the traditional ceremony--anointing with turmeric but connecting its deep roots and healing capabilities with family; playing Carnatic music, but especially Bharati's song about his "kannama" hoping Nu would appreciate the fluidity with which he uses this feminine form of endearment for Lord Krishna. At brewed them a pot of spearmint from his own veggie plot, Grandma S made them a slideshow, the Bangalore grandparents and A Pinni beamed the whole time, N Pinni read her Maya Angelou's "Still I Rise."

Nu got the traditional trays of offerings (fruit, pampering products, books, and a ton of girlie presents), and we added rainbow-themed sandals, bag, visor, and sweetened the deal further with unlimited screen time for the rest of the day.  I think the pictures do a good job of demonstrating my earnestness and Nu's own enjoyment in all the ceremonial love. 😍 😍
at May 30, 2020