Almost everyday that I didn't write here, I felt terrible, as though I was breaking a promise I had made to myself. Other days, I felt terrible anyway, because there was just so much to do that I couldn't spare the time to feel bad about not writing. And although some other deadlines were being met (dinners, grading, family time, job searches), things have felt wrong, off-center, subject to a constant tension resulting from getting things done *just* in the nick of time.

So today, another jab at the restart button.
I'm surprised it's just a week to Thanksgiving. But that's nothing like the shock I got the morning of Oct 28th when I discovered that it was Baby A's Halloween parade in two hours. Both kids had to manufacture their own Halloween costumes--so unlike the years when we decorated, hosted huge Halloween parties, and had costumes picked out a month in advance.  It's a good thing Baby A had her heart set on wearing a sheet to be a ghost (Shades of E.T., plus the book about Corduroy's Best Halloween Ever!) and Li'l A wanted to be Lemonhead Zombie--the fact that I know nothing about what that means is a good indication that the kid's about to be a teenager. (I'm getting old--when I tried to link to my favorite movie of all time, Google gave me a Katy Perry song? Sacrilege!)
On to pictures! 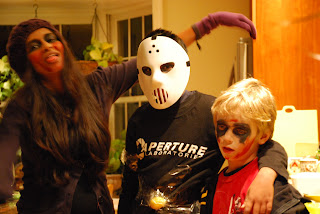 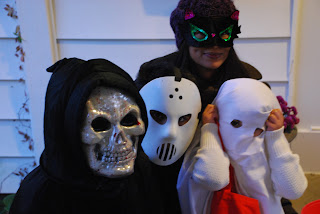