These shoes weren't meant for walking 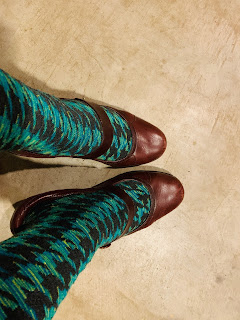 But as I put my lunchbox, and my briefcase, and my purse into the passenger side of the car and as I was beginning to take off my jacket before walking around to the driver's side to get in and finally get home, the car door shut on me and beeped like Knight Rider. My purse with the key was right there on the passenger seat, so I didn't think I could be locked out. But... Oh, I was. I tried the trunk, thinking I could crawl in, but it wouldn't open either. I couldn't go back to my office (my keys were in the car); I couldn't call AAA or Big A (my phone was in the car); It was nearly 8 and I was hungry and tired and couldn't get a snack (my wallet was in the car).

So I walked over to At's (I'd just been thinking I hadn't seen him since Nu's birthday... and writing that I realize it's been less than a week, but it has been a long week!). He tried the door too, but nothing. So we made the call, and Big A got on the road to bring me the spare key, Nu in tow since it was dark and I didn't want Nu to be home by themselves. (Big A initially demurred about having to drive all the way, and I was instantly mad thinking about all the times I drove into NYC with little At and Baby Nu to get him after a late shift at Bellevue. But he quickly did the right thing, and no one got yelled at. Ha.)

So an hour till reinforcements arrived, and my sweet At offered to feed and water me and sit with me on the MUN House porch (outsiders aren't allowed into student housing to minimize Covid exposure) to keep me company. But I was too keyed up, so I asked if we could walk around, and borrowed some socks from At, and we did. I kept telling him he should go back to work on the delayed deadlines and midterm extensions, but we kept walking and talking, and then Nu and Big A were there, and there was a teensy family reunion in the Heritage Parking Lot.