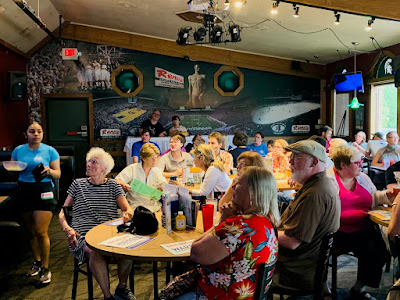 At a debate watch party today, they seated us on the dais because they'd run out of space.  Peek Big A and Nu at the back of the picture!

I joked to Big A that it reminded me of High Table practice...  When I was at Oxford, I attended Wolfson, which prides itself on its egalitarian hall and an absence of hierarchical seating, but back when I was at Exeter, high table was indeed a thing.

Anyway, Nu paid careful attention to everything, since L has generously said she will vote for whomever Nu suggests. This is the lovely L's way of offering a voice to Nu's generation who will--after all--be the ones dealing with the climate change policies of the next administration.