It was a verrrrry leisurely morning and after putting away the breakfast dishes, I was going to put away the cash I got from Big A (I never withdraw cash, dunno why, and Big A had a bunch to give to the kids as they finish summer jobs around the house).

So I was going to put away the cash in my wallet... except I couldn't find my wallet in my purse or any of the other plausible places I looked for it. At first no one believed me because I'm super careful... until my rising panicky squeaks convinced them. I realized the last time I had used my card was at Aldi... on Wednesday.

Then I alternated between mild self-congratulation at not having spent money for over 48 hours, and panic at having to replace all the cards and ID stuff. I called Aldi to see if I had left it there, but the call went to some central Aldi location, because apparently they don't take phone calls at the store. Ok.

By this time, everyone was looking for my wallet and turning up old ones and asking if that was the one, I went and put on pants so someone could take me to the store (I had no DL). And then! Big A found the wallet in the door of the car. Hallelujah. Testify!

After that, I took a relaxing shower and got everyone to Riverfront Park for the Pride parade. My friend MD, who runs a local queer teen group, had asked for help 'protecting' the teens from hecklers--but there weren't any, so I just hung out with all my beautiful babies. 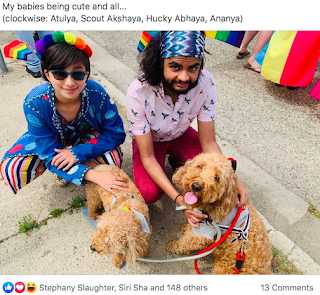