A long time ago, when At was a kindergartner, he earned a nickname. One of his classmates was describing him to her mom as her new best friend and thought his name was "Toolbox." We laughed and thought it was cute. We've called him that on and off, and he claims it as his YouTube channel name, etc.

So when I saw this cool cooler that shaped like a toolbox, I got it so we could ferry him food  from home. Imagine my dismay when I found it was liberally plastered with references to beer. So Nu and I set to work obscuring all the references to beer. I got a Rosie-the-Riveter fan art for feminist cred, Nu blocked out "beer" on another patch so it now reads "I love puppies." Then I filled it with treats and sent it off via grandparents for his Boss Day treat. 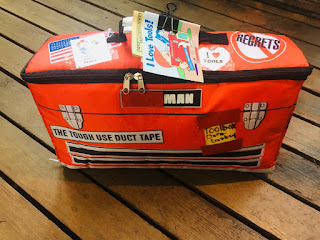 Delivery was accomplished and they even took him out for lunch at the pub. 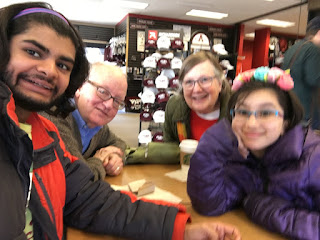