A couple of weeks ago, the kids were finally at the eco-camps they'd been talking about for about two months. It was kind of a big deal/special year since it was going to be the last year At (14) could go before he aged out and the first time Nu (5) would be old enough to go. 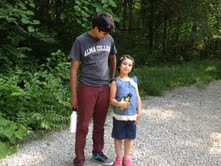 They had a nice beginning to the week, bumping into each other in the cafe, being assigned as buddies (completely randomly, per Nu ;), and then midweek this happened.


On Thursday, deputies, law enforcement officers and a K-9 unit from several area agencies searched the park, the Glen Helen Education Center on State Route 343 and neighboring areas, sheriff’s Maj. Eric Spicer said. The 1,000-acre nature preserve is an entity of the college, located adjacent to the campus.The gunman was spotted near the Outdoor Education Center at Glen Helen at about 11:30 a.m. According to a witness there, the man approached a dorm and when a counselor asked him to leave, the man displayed a gun.“He more or less implied and made a menacing statement to them,” Spicer said.

It turns out now that the college-aged counsellor had made the whole thing up. And everyone's angry because it was horrifying and also what a waste of tax-payer resource$, etc, etc.

I'm mostly okay with it. Because unlike the nightmares I've had since Newtown, this one case--this one very special case involving my very own children--seemed to have ended well: there was a gunman around the kids; no one got hurt. If we can't prevent men with guns showing up at kids' schools and camps, this should be the way it always ends.

Or the gunmen can be totally imaginary--I'm okay with that too; I could sleep through that. 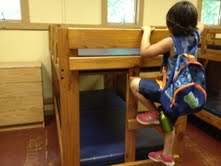