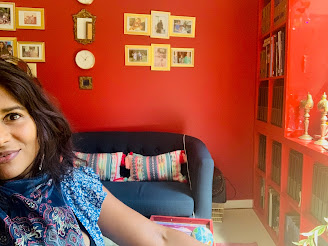 I was a bit skimpily dressed for my meeting--something I realized only as I was actually logging into the meeting and got the camera preview, so I threw on a scarf I fortuitously found stuffed between the couch cushions. There's no AC in the upstairs library, so it was super uncomfortable, but obviously not as uncomfortable as 'office' inappropriateness.
My selfie (after the meeting) came out with old family pictures perched over my shoulder; I appreciated the notion of mom and aunts figuratively having my back as I undertook a South Indian dosa fest for dinner (dosas, sambhar, chutney, chick*n varuval, and the mandatory potato-peas stuffing). Let the record show that today's dosa yearnings were brought on by the "Don't Mind if I Dosa" episode of Padma Lakshmi's delightful series Taste the Nation on Hulu.
at August 07, 2020

How To Make $10,000+ Per Month Online Without a Website ... It Works.. Even If You Have ZERO Experience mor details>>>>.Make Money Onlines For Beginner